Hello! I know Halloween has well and truly ended, in place of loud fireworks, Christmas cups and the inevitable two month build up to one day (I’m probably only being cynical considering the fact I’ll be getting through deadlines over Christmas!) but that won’t stop me posting my spooky brownies.

[Plus, the person who predicted the Bake Off result last week, which I mentioned in my blog on the Great British Bake Off final, will probably be happy to see this one.. and I’d definitely encourage them (and YOU, the person reading this) to give these a go!] 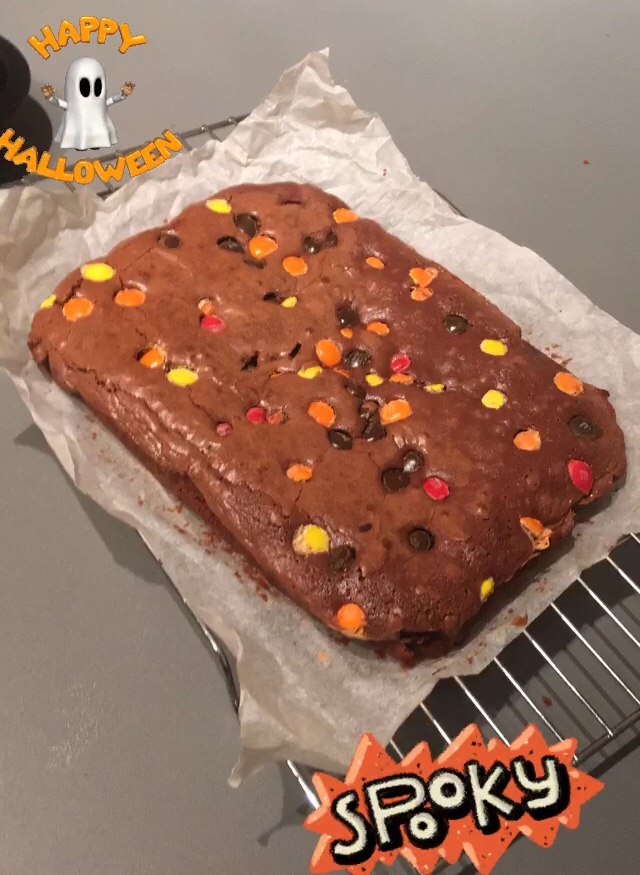 I know, I know, “what makes them so spooky, Jen?”. These aren’t normal brownies, really. They’re not possessed by a ghost or cursed by a witch, but- for a little spooky touch- I scattered a few M&Ms into the mix which not only added a brilliant crunch, they also gave the brownies an even more chocolatey flavour.

Of course, those of you who’ve been following me since the beginning (I’m so glad you are!) will know I’ve posted Chocolate brownies before. So, in a way, I am repeating myself but- with the Halloween version- there were a few tweaks I’ll have to make clear.

140g dark brown sugar (I didn’t have any light brown to hand, but using this sugar actually produced richer, fudgier brownies so- if that’s how you like yours- dark brown sugar is the way to go!)

100g chocolate (I used half dark chocolate, half milk)

Red, yellow, orange and brown M&Ms (though other spooky sweets would work here, too. A friend suggested Reece’s Pieces which I think would be incredible!)

2. Melt the chocolate and butter in a bowl over a pan of water then leave to cool.

3. Whisk together the butter and sugar until the mix is incorporated (by using dark brown sugar the mixture isn’t as pale as my first version of brownies was).

4. Add eggs and the chocolate mixture and fold together until combined.

5. Add the flour until the mixture is incorporated, then place the mixture in the lined tin, scatter your chosen spooky sweets evenly over the mix (don’t press them in, just leave them on top) and bake for 20 minutes (I found these ones took a little longer, so it might be a matter of taking them out and putting them back in again).

6. Leave to chill and, once chilled, cut into slices and enjoy.

I baked these for a Halloween social at uni and the people who were there (plus my family afterwards, as there wasn’t many people at the event) loved them. Even though I have a trusty brownie recipe (thanks Mum), the addition of dark brown sugar to the usual mix produced rich brownies that were so intense and fudgy I couldn’t resist another piece! Plus, the M&Ms made them even nicer somehow and it was really interesting to see the pop of colour at the top (not to mention, this recipe can easily be tweaked so you can add whatever chocolate you like to it).

Today’s a busy posting day (just because I didn’t want to miss the window for posting Halloween stuff, with Christmas rearing its ugly head) so, later on, you can expect the latest instalment of my “Dissertation Diaries”. I’ll let you into a secret….I’ve made progress so, if that means anything, I think I deserve a brownie!