Though the weather is usually slightly better in February (and by ‘slightly better’ I mean less rain), that didn’t stop me from grabbing a blanket, gathering the snacks and watching a movie or two. As I said in my last post (you can read it here), I thought I’d start a series of posts documenting what movies I’ve watched each month. That way, I can look back on the movies I watched over the year and, maybe, you might be inspired to watch one or two of them yourselves.

So far, I think my favourite movie of the year is Jojo Rabbit. I just loved the way it was filmed, the acting and the story itself. Of course, considering the fact that it is only March (though I have no idea how it got to March already, where did the last few months go?!), I know that my best film of the year will be subject to change.

Anyway, before you switch over, here’s the movies I watched in February. As with the January post, I’ll include some brief information of what the film is about, my thoughts and a star rating out of 5).

A Philadelphia police officer struggles with his lifelong obsession to track down a mysterious serial killer whose crimes defy explanation.

I had never heard of this film until I found it one weekend evening, browsing for something to watch. The film doesn’t take long to get started at all, as Thomas Lockhart races through the city with his partner Maddox and his detective brother-in-law Holt searching for a serial killer whose victims spontaneously bleed out. From that moment, you realise that this isn’t just your typical crime movie.

Jim Mickle uses a genre that is constantly springing up (crime/crime thriller) and takes it up a notch, with the twist that we skip forward nine years to yet more murders and a detective who is willing to put everything on the line to catch the killer.

At the helm is Boyd Holbrook as Locke. I’ve not seen Holbrook in any other films but I think he carried the movie extremely well. At once he was a family man, who loved his wife, and a detective who was dedicated to his job. He played intense and gritty, but also vulnerable and sensitive extremely well and – even when the plot went AWOL – I never stopped being interested in his character. Secondly, I have to mention Bokeem Woodbine who played Maddox. He was funny but also quite serious, and I loved how Holbrook and Woodbine gelled together in the scenes with the two detectives. I also have to mention Cleopatra Coleman, who played Rya, a character who was ruthless and sinister but also sensitive and thoughtful.

This film was a mixed bag for me. I loved the intrigue and excitement that came with it, and it was a whirlwind of emotions from the offset, but I think it took a long time to get really interesting.

A woman grieving over the death of her daughter loses grip on reality when she begins to think her girl may still be alive.

This was my second thriller of the month and it was completely different, though just as exhilarating as In The Shadow of The Moon. From the offset, we are greeted by a troubled woman, who is struggling with a tragedy and reeling from her ex-husband’s wish to get full custody of their son. From the start, everything appears extremely unhinged and – when she meets her neighbours and their seven year old daughter – things take an even more thrilling turn.

Kim Farrant brings a drama-mystery with thrilling twists and turns, a movie that starts out with a stalker movie premise but unravels and unwinds in so many unexpected and intriguing ways.

The cast is fronted by Noomi Rapace. I haven’t seen her in another film but her performance as Lizzie is brilliant. She plays a character that is at once unhinged and unpredictable but her longing for what she believes is captivating and heartbreaking in equal measures. On the other side is Yvonne Strahovski, who plays a mother that is loving, self-satisfied and wary all at once. Their scenes together were intense and unnerving illustrations of how far mothers will go for their children, and it meant I ping-ponged between whose side I was on throughout.

This film was suspenseful, intriguing and interesting throughout. A lot of reviews suggest the predictable nature of the film ruined it but I for one was surprised until the end.

In 1970s Georgia, a misfit girl enlists the help of a makeshift troop to get her on NASA’s Golden Record.

This time I enlisted Prime to help me find something to watch and, from there, I found Troop Zero. Troop Zero transported me to 1970s Georgia, full of Southern accents and children seeking adventure. Adventure is key with this film as, from the moment Troop Zero is formed, the film becomes a crazy, fun film with a lot more heart than I anticipated.

Bert and Bertie bring us a sensitive, fun movie full of laughter, tender moments and the idea of accepting who we are.

The cast was amazing. First and foremost you have Mckenna Grace as Christmas Flint, who injects quirkiness, fun and heart into the film from the outset. She really communicated how it feels to be different, how it feels to be passionate about something and how we should never give up on our dreams (despite what our critics say). The Troop Zero kids were brilliant, as well, we had eccentric but sensitive Joseph (Charlie Shotwell), feisty and fun Hell-No Price (Milan Ray), wild Smash (Johanna Colon) and sweet and lovely Anne-Claire (Bella Higginbotham), each one of them gelled really well and they definitely weren’t as irritating as I imagined a group of kids would be. The adults were also pretty good, too, we had Viola Davis as Miss Rayleen (Christmas’s father’s co-worker and Troop leader), Alison Janney as Miss Massey (the leader of a rival troop) and Jim Gaffigan as Ramsay (Christmas’s father).

The film was definitely better than I anticipated. It wasn’t the greatest film I’ve seen but it was light and fun and you can’t really go wrong with a David Bowie number.

In 2002, an artistically inclined seventeen year-old girl comes of age in Sacramento, California.

I’ve already seen this film before but, of course, when I saw that it was on Netflix I just had to watch it again. Even though 2002 feels like thousands of years ago, you are straight away planted in that time and the opening dialogue alone (which leads the titular character to throw themselves out of a moving car, as you do) lets you know the film is going to be fun and unpredictable.

Greta Gerwig gives us a coming of age movie that is lovely, funny and it definitely brings you back to being a teenager and all the trials and tribulations that come with it.

Saorise Ronan leads the cast as Ladybird, a plucky teenager with big dreams. I had a bit of a love-hate relationship with her character. At once I felt sorry for her and then I found myself cringing at her behaviour at times. All in all, Ronan captures what it’s like to be a teenager dealing with school, home life and her love life. Laurie Metcalf played Ladybird’s mother, Marion, and I loved how she worked alongside Ronan. I’ll also mention Beanie Feldstein (who played Ladybird’s best friend, Julie) and Timothee Chamalet (who played Ladybird’s love interest, Kyle), who I loved alongside Ronan.

The film is fun, sensitive and moving in places. It makes you realise just how great being a teenager is (for the most part)

As her relationship with Peter continues to grow, Lara Jean reunites with another recipient of her old love letters.

I loved how the first movie came to life so, granted, I knew I’d be watching the second installment regardless. I like how it picked up where the previous film had left off, but it also reminded us of what had happened before.

Michael Fimognari brings Jenny Han’s second book in the TATBILB trilogy to life in such a fun, cute but also tender way you just can’t help but fall in love with it.

Lana Condor returns as Lara Jean Song Covey, the cute baking-obsessed girl who navigates high school, changing family dynamics and her relationship with her now boyfriend. I think I went through a range of emotions where her character was concerned, I loved her just as much as I did in the first film but – at times – I really found myself questioning her decisions. Noah Centineo also returned as Peter Kavinsky, Lara Jean’s handsome, cocky boyfriend. He was very much the same Peter we met in the first film but he also showed off a vulnerable side in this one, which I really liked. This movie also introduced Jordan Fisher as John Ambrose, one of Lara Jean’s love interests. I haven’t been this conflicted since the great Team Edward v Team Jacob thing (which feels like 3000 years ago) but, honestly, I didn’t really know who I was rooting for.

The film is as cute as its predecessor and I loved how it showed all sides of first relationships.

Two people struggling with emotional and physical scars of their past discover even the smallest moments can mean something.

As soon as I found out one of my favourite books, Jennifer Niven’s All The Bright Places, was going to be a movie I was all over it. As soon as Finch and Violet were first introduced, I fell in love with them just as I had all those years ago reading the book.

Brett Haley brings Niven’s novel to life in a way that is vibrant, beautiful but also heartbreaking and tragic.

Elle Fanning played Violet Markey so well I couldn’t help but feel every emotion she felt. Though she wore a few questionable outfits, I couldn’t fault her performance as a girl regaining her life after tragedy. I loved watching her light up on screen as Finch and Violet fell in love. Justice Smith played Finch, a boy facing his demons and falling in love. He had the confidence of Niven’s original character, and at times (as I did with the book) I found myself extremely irritated by him, but he also had a sensitive edge that made my heart ache and the tears (inevitably) fall.

The film is lovely in so many ways but heartbreaking in so many as well. I would approach this one with caution, but I definitely wouldn’t avoid it if it’s your thing.

So that’s it for February movies! Have you seen any of these movies? Alternatively, what have you been watching last month and beyond? I’d love to chat in the comments 🎥 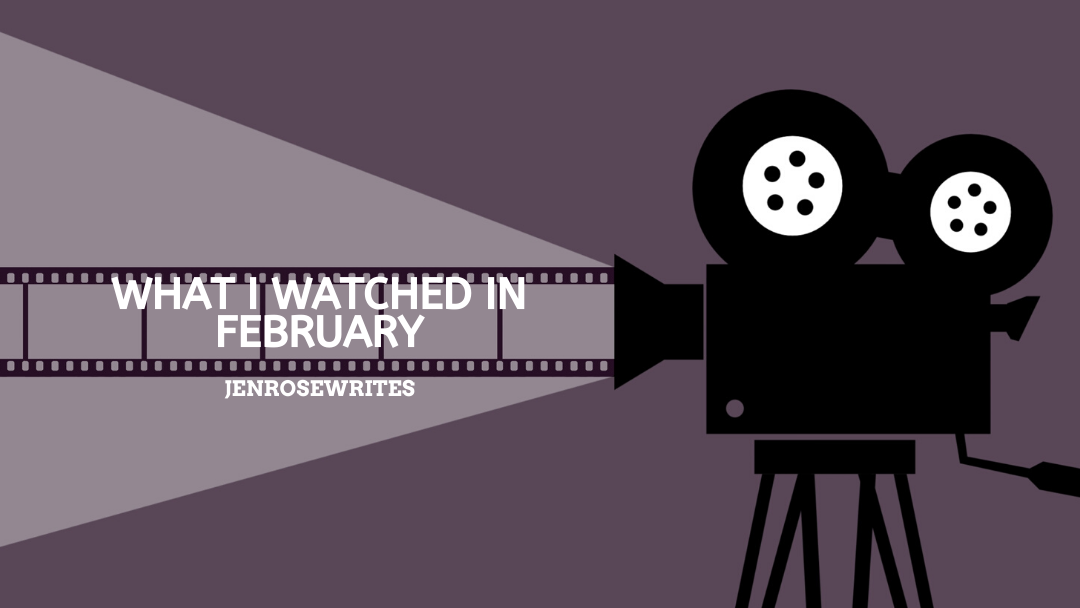 7 thoughts on “What I watched in February”