During this lockdown, I’ve watched a lot of TV. Admittedly, that’s no different to usual but – thanks to the release of Disney+ – I’ve been able to rewatch and relive so many of the shows and movies I loved when I was younger.

With that in mind, I thought I’d start a series of posts called “Jen Rewatches” which will document my experience of rewatching different Disney shows: I’ll talk through the characters then let you know which episodes are my personal favourites. First off, we have Hannah Montana.

From 2006 to 2010, Hannah Montana documented the life of Miley Stewart, a normal teenage girl by day and a pop singing sensation by night. The show had humour, heart and plenty of hits, plus it spawned a movie off the back of its success (Fun fact: Hannah Montana: The Movie was the first movie I saw in a cinema without my parents!). I absolutely loved the show when it was first out so it made sense that it was the first Disney Channel series I chose to rewatch.

The series revolves around Miley Stewart (and her pop-star alter ego, Hannah Montana). When I first watched the series, I loved her character. She was funny, cool and I loved het fashion sense. It only took me rewatching it to realise, like the outfits across the four seasons of the show, her character is just a tad problematic.

She might be funny, talented and loyal to her family and friends, but I just think – considering how many fantastic opportunities she gets throughout the show – she’s pretty ungrateful. Sometimes I just wanted to come through the TV and say to her YOU NEED TO ACKNOWLEDGE HOW LUCKY YOU ARE. 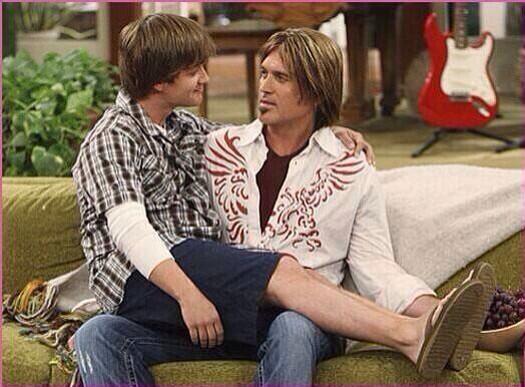 I never really paid attention to Jackson or Robbie Ray Stewart (Miley’s older brother and Dad) on first watch. For me, they were funny and sweet background characters that helped Miley out and provided some hilarious and touching moments in the show. When I rewatched, I realised they’re actually more important than I thought.

It’s strange because, watching the series again, I actually felt sorry for Jackson – having a famous sister and a Dad who manages her and writes her songs (at least for the first few series) leaves him in the background a little bit. Plus, he had to work for Rico the whole time! Robbie was a great Dad to both his kids, teaching them valuable lessons and supplying them with plenty of Dad jokes, but there were a few times when I just thought he’s really milking the Dad-trying-to-be-funny-thing.

As well as Miley/Hannah, I was drawn to Lilly and Oliver (her two best friends) from the start. When I first watched it, I loved the relationship between the three of them and I thought they provided some comedic relief when it was needed.

Watching it back now, I still think they’re two great friends to Miley and good characters. I really wasn’t a fan of the decision (though predictable) to make them a couple by the end, and I didn’t like the fact that – in the later seasons and the Forever spin off – Oliver also gets a go at being a famous singer. I wish the writers would’ve developed Lily’s character more, or at least picked a different partner for her.

There are several other ‘filler’ characters in the show, such as Rico, Jake Ryan and Jessie (among others). I always really disliked Rico (I just found him annoying and I really didn’t like his character) and that definitely hasn’t changed! Knowing me, I probably found Jake quite attractive when I first watched the show, so that tainted my view of him. Watching the show more recently, and after my own experience of the dating world, I realised he’s actually a rubbish character and an even worse boyfriend. Between the two, I definitely prefer Jessie – though part of me wishes they would’ve left Lilly and Miley without boyfriends in the end, and just focused on the friendship between them.

My favourite episodes in the first series are:

★ “Lilly, Do You Want to Know a Secret?” – Obviously I have to mention the first episode in the series. Great introductory episode, plus it marked the start of Miley telling a lot of people her secret (despite her wish for nobody to know about her double life!)

★ “O Say, Can You Remember the Words?” – This is (in my opinion) one of the funniest episodes of the show. It’s not even that funny, when you think about it, but I remembered the jokes from the first time I watched it (what felt like thousands of years ago) and I still laughed.

★ “My Boyfriend’s Jackson and There’s Gonna Be Trouble” – This episode was just mad from start to finish, but hilarious even now. I think Jackson being obsessed with getting invited to parties, and wanting all the free stuff, sums up what a lot of us would be like if we were celebrities.

★ “Cuffs Will Keep us Together” – Even though it’s quite the extreme way to make up from a fight, even watching it now I still think the two girls getting dressed and doing normal stuff whilst being handcuffed to each other is really funny.

★ “Me and Mr Jonas and Mr Jonas and Mr Jonas” – Though I’m a big lover of indie/80s music, I can never deny the fact that The Jonas Brothers were my first concert and – for a while – my music taste was made up almost entirely of Disney stars that could sing…or thought they could sing. They were definitely one of my many pre-teen (and even now as a young adult) crushes, so – no matter what the episode with them in entailed – I knew I’d like it. Years on, I still love it.

★ “The Way We Almost Weren’t” – I love TV shows and books that answer the question: what were things like before I existed? This episode asks this and also ponders what life might be like if Miley and Jackson didn’t. It’s definitely one of the more thought-provoking episodes.

★ “He Ain’t a Hottie, He’s my Brother” – When I was younger, and even sometimes now, a lot of my friends fancied my older brother. Luckily, probably due to the fact he’s seven years older than me, nobody got to that point. This episode definitely plays on the fear of that possibility but it’s actually quite funny.

★ “Knock Knock Knockin’ on Jackson’s Head” – I really liked the idea of this episode explored of having your sibling reset almost…and be at your beck and call because of it! Of course, I’m not sure I’d be keen on them meddling in my attempts to flirt and stuff like that.

★ “He Could Be The One” (Part 1 & 2) – They’ve done a few two part episodes in Disney history but these two are probably one of – if not my favourite – my favourites. I think I loved it when I was younger because the prospect of picking between two people, who both like you equally,  was completely alien. It’s less alien now, but definitely not happening (much like when I first watched it), but I still love watching the messy episode play out.

*As someone who wasn’t fond of this series when it first aired, picking favourite episodes for this series was hard – I didn’t really like any of them!

★ “Sweet Home Hannah Montana” – This was the first episode of the last series and it just proved my statement that Miley is ungrateful is true! I mean, I wouldn’t want that room either but a. She’s old enough to change it herself and b. Surely the whole family – plus Lilly, which is a plot point I still don’t really get to this day – uprooting to a new home is good enough.

★ “Hannah Montana to the Principal’s Office” – The maddest thing about this episode is the fact that people are more hyped up about Hannah Montana being at their school than they were when Jake Ryan first showed up. You’d think, based on the volume she talks about Hannah stuff, everybody would’ve figured out her secret straight away anyway.

What have you been watching recently? I’d love to chat in the comments 😊.